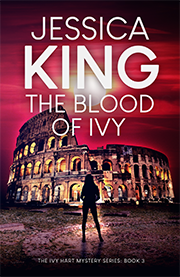 The book you have been waiting for is finally here and Ivy is going to Italy!

In her quest for the truth, blood will be spilled. But will it be her own blood?

With all her leads exhausted, Detective Ivy Hart of the LAPD has given up hope of ever catching the leader of the Kingsmen, a dangerous witch-hunting cult. But when a young woman is gruesomely murdered in Italy and a familiar calling card is left at the scene, Ivy realizes the Kingsmen’s reign of terror is far from over.

Taking their investigation to Europe, Ivy and her partner, Detective Vince Benton, make a shocking discovery about the murderer that leads them into the dark underbelly of the church and connects back to the man suspected of killing Ivy’s mother over a decade ago.

As the ghosts of Ivy’s past catch up to her present, she is determined to piece together the clues before another life is lost. Will Ivy finally put an end to the ruthless Kingsmen and finally found out exactly what happened to her mother once and for all?

GET IT ON AMAZON NOW: https://www.amazon.com/gp/product/B087DXSTKH